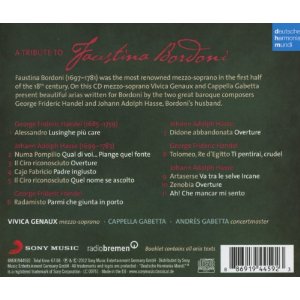 In this Deutsche Harm Mundi CD,  Genauxas  sound so beautiful a shake as she pays tribute to one of the great icons of the 18th Century’s operatic world, the legendary Faustina Bordoni. Mezzo-soprano Faustina Bordoni was considered to be one of the greatest singers of the first half of the C18th, entrancing audiences in Italy and throughout Europe and commanding huge fees. All of the great Baroque composers wrote for her, including featured composers George Frideric Haendel (1685-1759) and Johann Adolph Hasse (1699-1783), to whom she was married and in whose opera productions she starred and them as a “truly an exquisite couple”, the famous librettist Metastasio described.