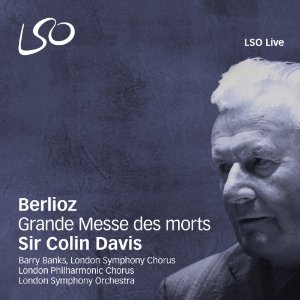 The Grande Messe was commissioned from Berlioz to mark the death of  life, reveals much about Berlioz’s heartfelt response to the Requiem text. Sir Colin Rex Davis is an English conductor broadly revered as an expert of  Mozart, Berlioz, Elgar, Sibelius, Stravinsky and Tippett, and his LSO live Berlioz recordings have been one of the most widely acclaimed series’ of classical recordings of recent years. This spectacular new recording features the London Symphony Orchestra joined by English lyric tenor Barry Banks and two of London’s finest choirs, the London Symphony Chorus and London Philharmonic Choir.This release of the monumental Grande Messe des morts marks the completion of this cycle and further confirms Sir Colin’s status as one of the greatest living conductors of Berlioz’s music.