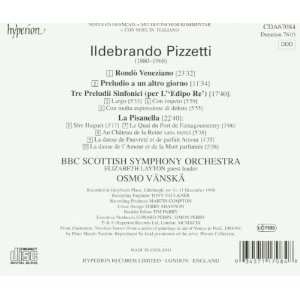 Ildebrando Pizzetti is 20th Italian composer of classical music ,  his compositions has an individual voice and awalys   highly descriptive , though  he was part of the “Generation of 1880” along with Ottorino Respighi and Gian Francesco Malipiero whose primary contributions  in  Italian  20th classical music. Conducted by Osmo Vanska,  the BBC Scottish Symphony Orchestra performed an evocative and colorful and full of atmosphere of  spirit. It is a quite magnificent to a large-scale tone poem, both CD and works!