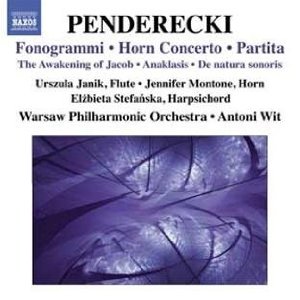 Polish conductor Antoni Wit,  early studied conducting with Henryk Czyz at the Academy of Music in Kraków, and continued his musical studies with Nadia Boulanger in Paris.  After completing his studies he was engaged as an assistant at the Warsaw Philharmonic Orchestra by Witold Rowicki. After winning second prize in the International Herbert von Karajan Conducting Competition in Berlin (1971), he became an assistant conductor to the patron of that competition. Later he was appointed conductor of the Poznań Philharmonic, collaborated with the Warsaw Grand Theatre, and from 1974 to 1977 was artistic director of the Pomeranian Philharmonic, before his appointment as director of the Polish Radio and Television Orchestra and Chorus in Kraków, from 1977 to 1983. From 1983 to 2000 he was managing and artistic director of the National Polish Radio Symphony Orchestra in Katowice, and from 1987 to 1992 he was the chief conductor and then first guest conductor of the Orquesta Filarmónica de Gran Canaria. In 2002 he became managing and artistic director of the Warsaw Philharmonic Orchestra and Choir. Since the season 2010/11, he has been first guest conductor with the Orquesta Sinfónica de Navarra in Pamplona. His international career has brought engagements with major orchestras throughout Europe, the Americas and the Near and Far East.

He has made over 200 records, including an acclaimed release for Naxos of the piano concertos of Prokofiev, awarded the Diapason d’Or and Grand Prix du Disque de la Nouvelle Académie du Disque. In January 2002 his recording of the Turangalîla Symphony by Olivier Messiaen (8.554478–79) was awarded the Cannes Classical Award at MIDEM Classic 2002. In 2004 he received the Classical Internet Award. He has completed for Naxos a CD series of Szymanowski’s symphonic and large-scale vocal-instrumental works, each rated among ‘discs of the month’ by CD magazines (Gramophone, BBC Music Magazine). He also received the Record Academy Award 2005 of Japanese music magazine Record Geijutsu for Penderecki’s Polish Requiem (Naxos), and four Fryderyk Awards of the Polish Phonographic Academy. He has received seven GRAMMY® nominations for Penderecki’s St Luke Passion in 2004 (8.557149), A Polish Requiem in 2005 (8.557386–87), Seven Gates of Jerusalem in 2007 (8.557766), Utrenjain 2009 (8.572031) and Karol Szymanowski’s Stabat Mater in 2008 (8.570724) andSymphonies Nos 1 and 4 in 2009 (8.570722). In 2010 Antoni Wit won the annual award of the Karol Szymanowski Foundation for his promotion of the music of Szymanowski in his Naxos recordings. In December 2012 the box of five CDs containing all of Penderecki’s symphonies and selected other works, recorded for Naxos with the National Polish Radio Symphony Orchestra in Katowice and the Warsaw Philharmonic Orchestra and Choir under the baton of Antoni Wit, received Choc of the Month from the music magazine Classica.