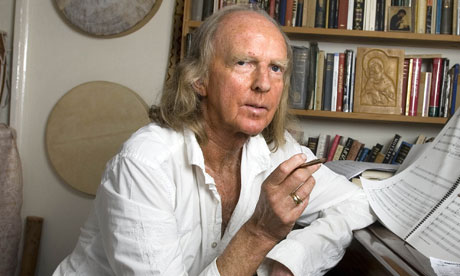 Whatever you think about works such as the tragically popular (in the sense of its baleful use at the most famous royal funeral of recent memory) Song for Athene, or his cello concerto The Protecting Veil, which Steven Isserlis made one of the most beloved contemporary pieces of the late 20th century, John Tavener’s music is not reducible to one-dimensional labels such as “holy minimalism”.

That kind of categorisation suggests that Tavener’s work is only ever an escape from the modern world and a retreat from and rejection of the achievements and sounds of musical modernism. If you’ve only heardSong for Athene, you might not think that its composer would be much of a fan of Anton Webern or Elliott Carter. But after Carter’s death Tavener wrote in these pages: “He did something no other modernist has ever achieved. He, in the last 10 years of his life, seemed to rid modernism of all its angst, creating sparkling edifices of joy and beauty, like the Flute Concerto and Dialogues for Piano and Chamber Orchestra. From a composer’s point of view, he was an absolute master – and he did it better than any of us.” In Webern, Tavener hears a crystalline meditationon musical material that transcends the composer’s ego; qualities he has found also in the lucid music of Stravinsky’s late, serial period, as well as the radiant musical spirit of Olivier Messiaen.

What all of these enthusiasms have in common, from Tavener’s point of view, is an attempt to find a musical objectivity, a sense of letting the material achieve a life that has its own internal energy, something outside the composer’s subjectivity or “angst”. That’s Tavener’s main critique of some 20th century music (indeed, music in general): he identifies a morbid, decadent subjectivity as the driving force behind much of the avant-garde and the expressionism that preceded it. There’s a parallel with Tavener’s spiritual life in this essential view: for much of his life an Orthodox Christian (although he has recently spoken of every religion being as “senile as one another”), his ideal relationship with his spirituality as it’s expressed in his music is that he should be a channel through which the music flows, with as little impediment from the predilections of his own personality as possible. “I wanted to produce music that was the sound of God. That’s what I have always tried to do.” That’s language that’s liable to alienate non-religious listeners, but what it’s really about is a striving to release his music from the mundanities of his own consciousness. You hear the results of that attempt on the grandest and gentlest scale in The Veil of The Temple from 2003, a seven-hour-long cycle for choir that’s a combination of liturgical vigil and spiritual epic, as well as a test of stamina for the singers, the players, and the posteriors of the audience.

Compare that piece to the music that shot Tavener to fame in the late 1960s, and you might think they’re by different composers. In his mid-20s, Tavener symbolised what must have seemed like a visionary coming-together of the pop and classical musical avant-gardes. In 1968, his gleefully postmodernist cantata The Whale was the first piece played by the-then young turks of new-music performance, the London Sinfonietta, and it was then released in 1970 on The Beatles’ Apple record label. (“I was less surprised at John Lennon’s enthusiasm, but I was surprised at Ringo’s”.) The piece is a riotous recreation of the story of Jonah and the Whale. There’s a narrator, there are electronic sounds, there’s bestial – or rather cetacean – improvisation from the choir, there are football rattles and a whip, there’s serialism, crunching dissonance, and loud-hailers. “The Whale is a piece written by an angry young man”, Tavener said in 2004. “I was angry because the world didn’t see the cosmos in metaphysical terms. I was also angry because what I saw of so-called classical music in those days was very po-faced. I wrote The Whale as a reaction in a way. The piece is very fantastical.” Tavener’s musical maximalism continued throughout the 1960s and into the 1970s, in pieces such as Celtic Requiem, with its Irish folk tunes, electric guitars, and children’s songs, and his opera for the Covent Garden, Thérèse.

What’s surprising when you hear pieces like The Whale or Ultimos Ritos, a sprawling fresco of the “last rites” is not just the sounds they make, it’s their aesthetic of open-eared inclusion that’s so striking. It’s all markedly different from a choral piece such as The Lamb, which like so many of Tavener’s dozens of choral pieces, seems to embody an aesthetic of excluding any superfluous sound and fury in its simplicity, its slowness and stillness, and above all, its harmonic attractiveness and consonance. For some, that turn to the musical terra cognita of diatonic harmony (one without the novel structural underpinning of a technique such as Arvo Pärt’s tintinnabulation) makes Tavener a pseudo-spiritual sell-out, writing music whose “transcendence” is nothing of the sort, but rather a cheaply achieved audience manipulation.

But it’s not that straightforward, and certainly not in the music that Tavever has written in recent years. At its most affecting, Tavener’s work isn’t about trying to fill your ears and your body with a cynically achieved ethereality, it’s about giving the listener the space to create his or her own sense of private contemplation. That’s still not going to work for some listeners, who still hear Tavener only as a badge of that which makes us most wretched; that’s to say, humanity’s belief in its own wretchedness, as if the human condition were something we had to escape rather than celebrate.

Yet Tavener’s recent music has accommodated both a greater range of thinking than his Orthodox-inspired works of the 1980s and 1990s (The Beautiful Names, for example, is a setting of the 99 names for Allah that are found in the Koran), and a renewed interest in a more modernist style of dissonance and conflict. And as you’ll find in The Protecting Veilthere’s more in this music than merely a rapt penitential radiance. In fact, there’s a numinous wildness in Tavener’s stratospheric writing for the solo cello, and the blazing intensity of the textures he finds from the string orchestra. As a composer who genuinely became a major cultural figure in the country’s consciousness, Tavener is unique in the story of post-war British music; his music deserves and repays hearing and re-hearing with ears and minds as open as his have always been.

There, Tavener wants to produce music that is the sound of God. His compositions today give the listener the space to create a sense of private contemplation.