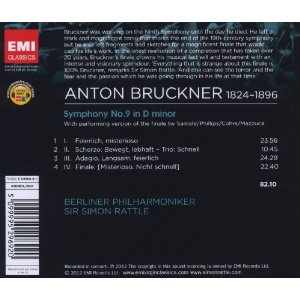 Sir Simon Rattle conducts the Berlin Philharmonic Orchestra with reconstructed 4th movement in an exciting new record scored at Carnegie Hall on February 24, 2012,  featured by Samale/Mazzuca/Phillips/Cohrs (SMPC), has been nominated for a BBC Music Magazine Award in the Orchestral category.The BBC Music Magazine Awards are the only classical music awards in which the main categories are voted for by the public. In what is regarded as the definitive form of the Ninth Symphony, this is the first recording of a new revision of the SMPC Complete Performance Version which proposes a way to realize Bruckner s intention of combining themes from all four movements, based on more than 600 bars of incomplete autograph score, sketches and drafts.