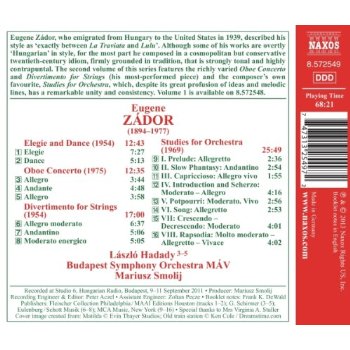 Eugene Zádor, who born in Hungary in 1894 , emigrated from Hungary to the United States in 1939, and worked tirelessly in Hollywood making other names famous, was described his style as ‘exactly between La Traviata and Lulu’. Although some of his works are overtly ‘Hungarian’ in style, his style of composing derived from student days with Heuberger in Vienna and Reger in Leipzig, his eventual catalogue including four symphonies, several operas and chamber music. Maybe he was also a musical magpie, with influences as diverse as Bartok, Weill and Holst, but this engaging score can hardly fail to give pleasure. Equally easy on the ear, and straight from a romantic movie, comes the Oboe Concerto, and you need to move to the three movements of the Divertimento for Strings, composed in 1954, to hear a really gifted ‘classical’ composer at work, and the composer’s own favourite,Studies for Orchestra, which, despite its great profusion of ideas and melodic lines, has a remarkable unity and consistency.