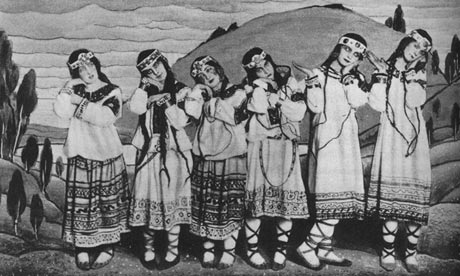 Igor Stravinsky is a Russian/international composer who began two of the major strains of contemporary music. The Rite of Spring is one of the great works of the 20th century.

“Mild protests against the music,” wrote Stravinsky, “could be heard from the beginning.” The composer was remembering the night of 29 May 1913 at the Théâtre des Champs-Elysées in Paris. The event was the premiere of a new ballet called The Rite of Spring – and, if you believe all the stories about what happened that celebrated evening, not least the one about the riot that ensued, it’s as if the 20th century only really got going when the audience in that gilded art-nouveau auditorium started kicking off.

If you know how Stravinsky’s music begins, you may not be too surprised by the audience’s reaction to The Rite, which was choreographed by the young dancer Vaslav Nijinsky and performed by Serge Diaghilev’s Ballets Russes. After the strangest, highest and most terrifyingly exposed bassoon solo ever to open an orchestral work, the music becomes a sinewy braid of teeming, complex woodwind lines. “Then,” Stravinsky told his biographer, “when the curtain opened on the group of knock-kneed and long-braided Lolitas jumping up and down, the storm broke.”

That was Nijinsky’s choreography for the Dance of the Adolescents section, the music’s first and still-shocking moment of crunching dissonance and skewed rhythm. Stravinsky said that at this point, “Cries of ‘Ta gueule‘ [shut up] came from behind me. I left the hall in a rage. I have never again been that angry.” Stravinsky spent the rest of the performance in the wings, holding on to Nijinksy’s tails as the choreographer shouted out cues to his dancers over the din.

What really happened on that night of nights? Was this a genuine riot, as it is so often described – a shocked response to Stravinsky’s simultaneously primitivist and modernist depiction of an ancient Russian ritual devoted to the seasons? Or was it simply a publicity stunt, a wilfully orchestrated succès de scandale that has, in the years and the retelling, grown into a great musical myth? And was The Rite really such a revolution in music, a gigantic leap of faith into a terra incognita that would inspire every subsequent composer?

There is still no more influential piece of music in the 20th century. The Rite is the work that invariably tops polls of the biggest and baddest of the last 100 years. From Elliott Carter to Pierre Boulez, fromSteve Reich to Thomas Adès, other composers couldn’t have done what they did without it as inspiration. Talking many years after its composition, Stravinsky claimed he had to put himself in a kind of creative trance to compose it, an echo of the fate that befalls the poor girl who dances herself to death in the ballet’s climactic Sacrificial Dance: “Very little immediate tradition lies behind The Rite of Spring – and no theory. I had only my ear to help me; I heard and I wrote what I heard. I am the vessel through which The Rite passed.”

So there’s nothing so old as a musical revolution. But even if it’s true that Stravinsky plundered traditions both ancient and modern to create The Rite, there’s something that, finally, can’t be explained away, something you should feel in your gut when you experience the piece. A century on, the truly shocking thing about The Rite is still with us, right there at its climax. A good performance will merely pulverise you. But a great one will make you feel that it’s you – that it’s all of us – being sacrificed by Stravinsky’s spellbinding and savagely cruel music.

By  Tom /The Guardian