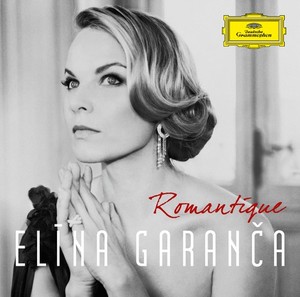 Her tone has deepened . . . as has her expressivity . . . here she shows refreshing commitment and spontaneity. The clarity and roundness of her upper range also distinguish her. She is at her best in sustained arias by Gounod and Tchaikovsky . . . She offers a particularly impassioned account of “O ma lyre immortelle” from “Sapho” — the title character’s final aria before her suicide. “Farewell you native hills and fields” from “The Maid of Orleans” shows her as a compellingly conflicted Joan of Arc.

. . the glamorous Latvian lyric mezzo Elina Garanca . . . has chosen an intelligent and unusual group of arias that showcase not only her seductive, creamy voice but also her substantial interpretive gifts. Singing here in French, Italian, and Russian, she demonstrates why critics have been spilling superlatives in describing her performances . . . Her effortless ability to soar from the lower to the upper part of her range and back again provokes shivers. Although classified as a mezzo-soprano, Garanca has a soprano-like upper register, and she never bleats down low, as some mezzos do. She floats down to the high notes, and her voice retains its same quality throughout her range . . . [on “Farewell, ye hills and native fields,” from Tchaikovsky’s “The Maid of Orleans”]: Singing the original Russian version (instead of the better-known French one) with clear and poetic diction, her Joan burns with resolve, not hysteria . . . Still in the early phase of her career, Elina Garanca should hopefully be giving us many more polished, refined, and emotionally committed performances on stage and on disc for some years to come.
From Record Review
[asa]B008CYV03M[/asa]