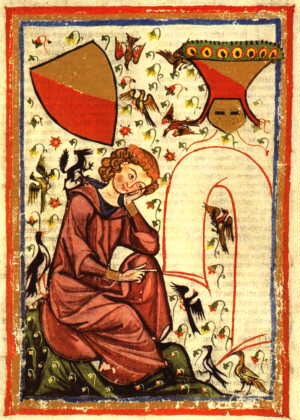 Bernart de Ventadorn (1130-1140 – 1190–1200), also known as Bernard de Ventadour or Bernat del Ventadorn, was a prominent troubador of the classical age of troubadour poetry. Now thought of as “the Master Singer” he developed the cançons into a more formalized style which allowed for sudden turns. He is remembered for his mastery as well as popularisation of the trobar leu style, and for his prolific cançons, which helped define the genre and establish the “classical” form of courtly love poetry, to be imitated and reproduced throughout the remaining century and a half of troubadour activity.

Bernart was known for being able to portray his woman as a divine agent in one moment and then in a sudden twist, portraying her as Eve, the cause of man’s initial sin. This dichotomy in his work is portrayed in a “graceful, witty, and polished” medium.

According to the troubadour Uc de Saint Circ, Bernart was possibly the son of a baker at the castle of Ventadour (Ventadorn), in today’s Corrèze (France). Yet another source, a satirical poem written by a younger contemporary, Peire d’Alvernha, indicates that he was the son of either a servant, a soldier, or a baker, and his mother was also either a servant or a baker. From evidence given in Bernart’s early poem Lo temps vai e ven e vire, he most likely learned the art of singing and writing from his protector, viscount Eble III of Ventadorn. He composed his first poems to his patron’s wife, Marguerite de Turenne.