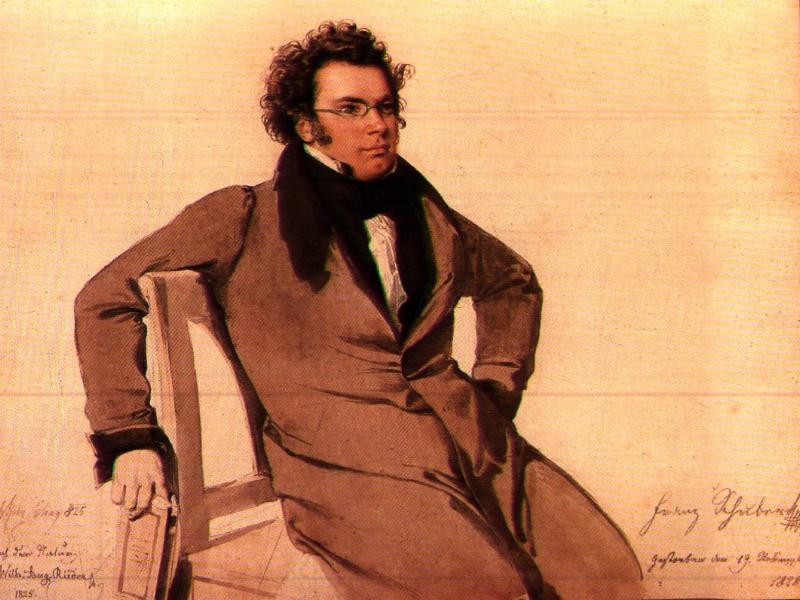 The son of a schoolmaster who had settled in Vienna, Franz Schubert was educated as a chorister of the imperial court chapel. He later qualified as a schoolteacher, briefly and thereafter intermittently joining his father in the classroom. He spent his life largely in Vienna, enjoying the company of friends, but never holding any position in the musical establishment or attracting the kind of patronage that Beethoven had 20 years earlier. His final years were clouded by illness, as the result of a syphilitic infection, and he died aged 31, leaving much unfinished. His gifts had been most notably expressed in song, his talent for melody always evident in his other compositions. Schubert’s compositions are generally numbered according to the Deutsch catalogue, with the letter D.

Schubert wrote operas, Singspiel and incidental music for the theatre. His best-known compositions of this kind include the music for the unsuccessful play Rosamunde, Fürstin von Zypern (‘Rosamunde, Princess of Cyprus’), mounted at the Theater an der Wien in December 1823. The ballet music and entracte from Rosamunde are particularly well known.

Among the various works Schubert wrote for church use, particular mention may be made of the second of his six complete settings of the Mass. He completed his final setting of the Mass in the last year of his life and it was first performed the following year.

Schubert wrote for mixed voices, male voices and female voices, but by far the most famous of his vocal compositions are the 500 or so songs—settings of verses ranging from Shakespeare to his friends and contemporaries. His song cycles published in his lifetime are Die schöne Müllerin (‘The Fair Maid of the Mill’) and Die Winterreise (‘The Winter Journey’), while Schwanengesang (‘Swan-Song’) was compiled by a publisher after the composer’s early death. Many songs by Schubert are very familiar, includingDer Erlkönig (‘The Erlking’), the Mignon songs from Goethe and the Songs of Norma from Sir Walter Scott.

Orchestral Music
The ‘Unfinished’ Symphony of Schubert was written in 1822, but no complete addition was made to the two movements of the work. Other symphonies of the eight more or less completed include the ‘Great’ C major Symphony and the Classical and charming Fifth Symphony. His various overtures include two ‘in the Italian style’.

Of Schubert’s various string quartets the Quartet in A minor, with its variations on the well-known Rosamunde theme and the Quartet in D minor ‘Death and the Maiden’, with variations on the song of that name, are the most familiar. The Piano Quintet ‘Die Forelle’ (‘The Trout’) includes a movement of variations on that song, while the great C major String Quintet of 1828 is of unsurpassable beauty. The two piano trios and the single-movement Notturno date from the same year. Schubert’s Octet for clarinet, horn, bassoon, two violins, viola, cello and double bass was written early in 1824. To the violin sonatas (sonatinas) of 1816 may be added the more ambitious Duo for violin and piano, D. 574 of the following year and the Fantasy D. 934, published in 1828, the year of Schubert’s death. The ‘Arpeggione’ Sonata was written for a newly devised and soon obsolete stringed instrument, the arpeggione. It now provides additional repertoire for the cello or viola.

Schubert’s compositions for piano include a number of sonatas, some left unfinished, as well as the Wanderer Fantasy and two sets of impromptus, D. 899 and D. 935. He also wrote a number of dances for piano—waltzes, Ländler and German dances. His music for piano duet includes a Divertissement à l’hongroise, marches and polonaises, largely written for daughters of a member of the Esterházy family, for whom he was for a time employed as a private teacher.